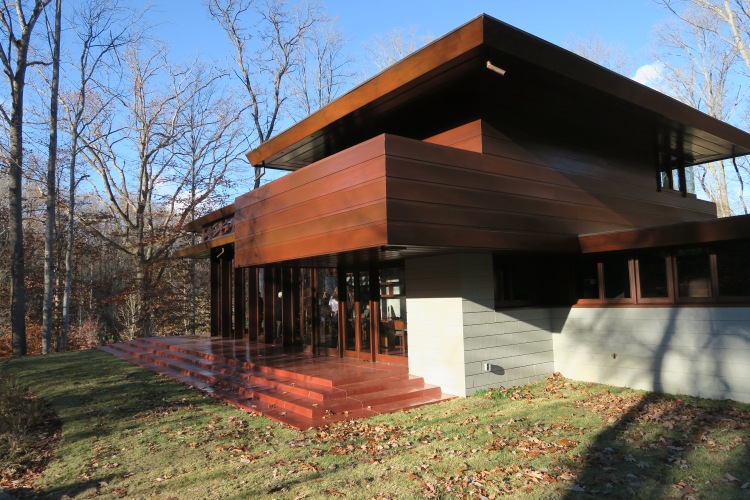 An affordable Frank Lloyd Wright home? That was the goal of the “Usonian home,” a design concept born during the Great Depression. Wright chose Usonian as an abbreviation of “United States of North America” and he envisioned these homes as a way to make good design available to the American middle class.

Between 1936 and 1959 about 60 Usonian homes were built by Wright or his apprentices. Usonian homes were delivered in shipping containers to be assembled by third party contractors. Detailed blueprints provided guidance in the construction.

Below is a copy of the letter requesting the commission of this house. I like its directness, beginning with “Would you build a home for us?” and concluding, “Please say ‘yes’ Mr. Wright.”

The back of the home and living areas face southwest and open to the outdoors by way of extensive glass walls and doors. This side of the home would have faced the Millstone River in its original New Jersey location. At Crystal Bridges, it faces Crystal Spring hollow.

From a nearby hiking trail you get this view looking down on the front of the home.

Students in the Fay Jones School of Architecture and Design built the Interpretive Pavilion that serves as a transitional and informational entrance to the Bachman-Wilson House. A Crystal Bridges blog post and video provides an overview on how this was done.

The mahogany and glass clerestory windows increase natural light. These windows break up the cinderblock walls and form a band around the house below the ceiling. Clerestory windows and two narrow front entrance windows were the only openings to the front of the house. Wright modeled this window design on wing-shaped sycamore tree seeds.

Crystal Spring is in the hollow just downhill from the back side of the Bachman-Wilson House. The spring flows from the base of a rock just behind the rock bridge above this cascade. Nice backyard! 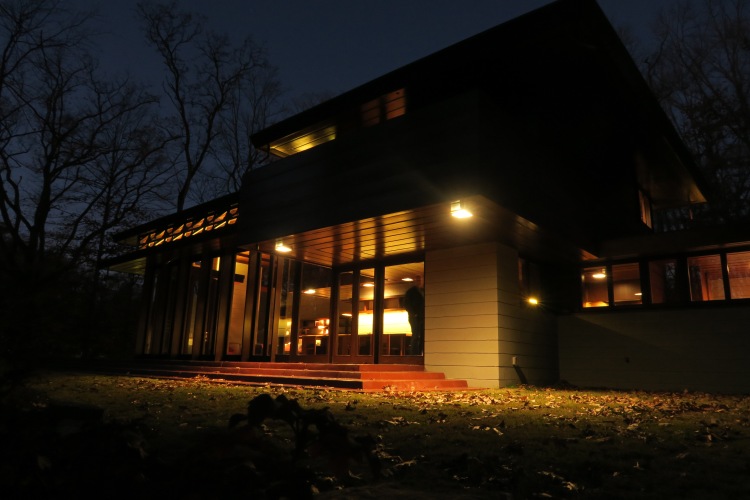 Our self-guided tour of the Bachman-Wilson House was at 5:30 p.m. Tickets were required to limit the number of visitors. Ordering free tickets online was easy.

It was a treat to see 1950s appliances, the fireplace, and living areas. I was impressed by a very narrow hallway that connected the living area to a work area next to the carport. The space saved from the hallway was added space for the kitchen.

Disassembling, labeling, shipping, and reassembling this house on its new site is another story. On my last visit to Crystal Bridges, the house was under construction. I can’t comprehend the complexity of this project. The builders had the original blueprints available but had to compensate for minor adjustments the original contractors made in construction.

Several times during our tour I reached compulsively for the camera on my belt, but I followed the rules and resisted indoor photos. As I walked through this structure, I felt thankful that it now stands in this Arkansas location where it will be maintained and protected for future generations. 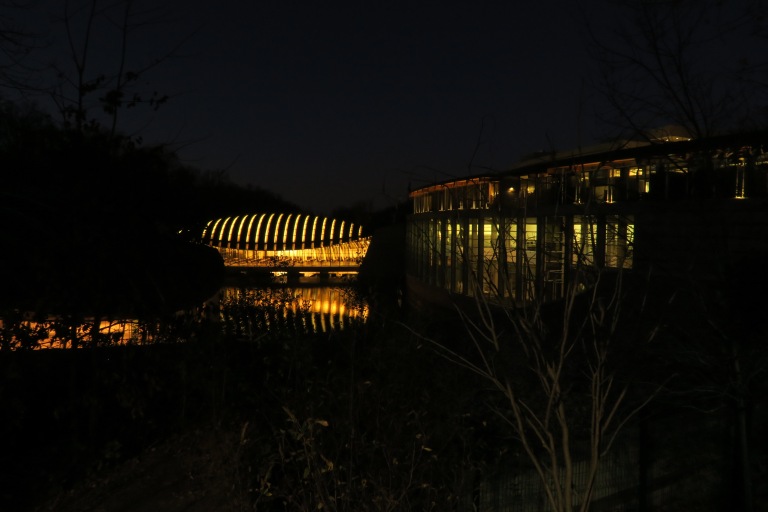 My wife, oldest daughter, and I made the short walk back to the parking lot and then began the easy task of finding a nearby restaurant before making the drive back to Alma.

If you want to see more about the trails of Crystal Springs, have a look at this post from last April.

One thought on “Crystal Bridges:Bachman-Wilson House by Frank Lloyd Wright”