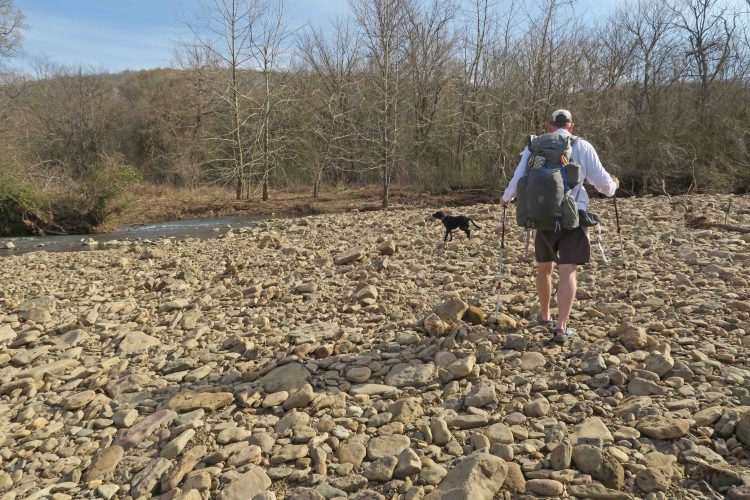 Hiking buddy, Nick, said he needed some time on the trail and wondered what section we might try. Hiker-dog had never done the few miles from Dockery Gap to White Rock Mountain, so we decided to do Lake Fort Smith State Park to Fane Creek, just over 30 miles.

This route included new miles for Nick and Hiker-dog but repeats for me. As we walked this familiar path, I remembered once again that we never walk the same trail twice. 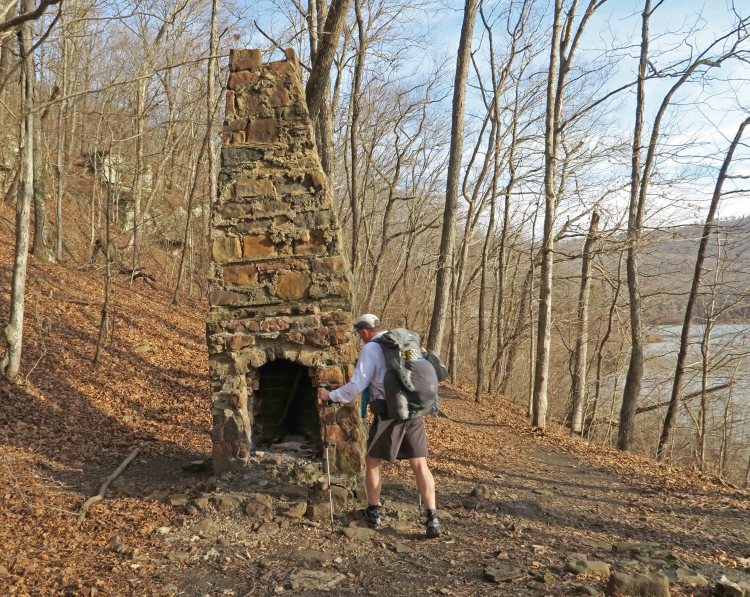 Nick checking out the fire bricks inside the remnants of one homesite along the trail. 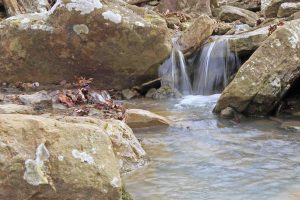 Water was plentiful. This was my first filterless backpacking trip using only water treatment drops, so I enjoyed “selecting” my water from any number of small streams we passed. 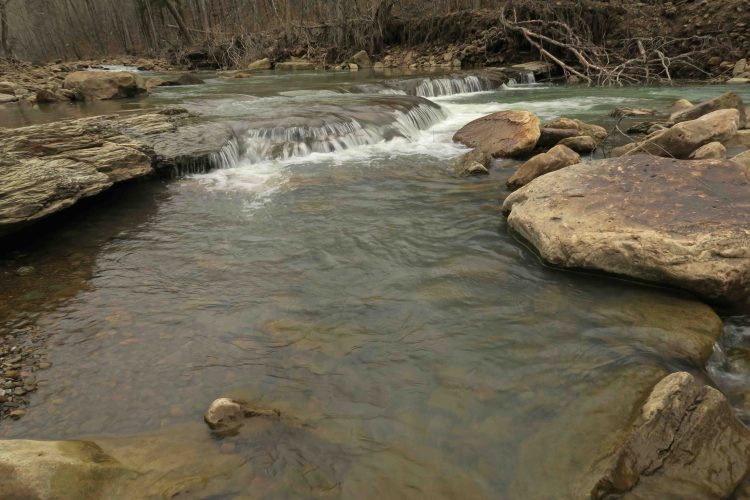 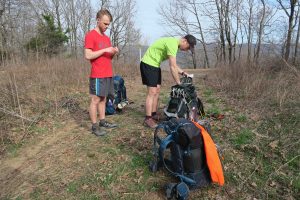 We met a family camped at mile 10. While visiting with the father, Luke, I was impressed with his two young daughters’ ability to run without pain barefoot through the woods.

The next day we met two backpackers, Nick and Foster, from Kansas who’d camped in the area and were continuing on the OHT the next day. As we approached White Rock Mountain, a young man with a group called out, “Is that Hiker-dog?” She’s such a celebrity. Turns out, Chris had picked up a copy of Five Star Trails: The Ozarks, and met Hiker-dog at the Hare Mountain Hike-In. We expected a social hike due to the time of year and enjoyed meeting good folks on the trail. 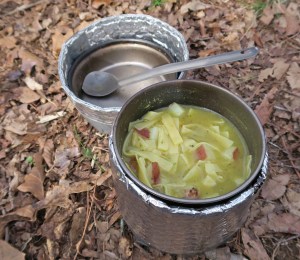 For the first evening meal I boiled red potato slices a few minutes then added a Knorr side dish that cooked quickly. Good stuff!

On the second night at Salt Fork Creek, I used instant potatoes combined with a slice of Spam. Quick, easy, and light. 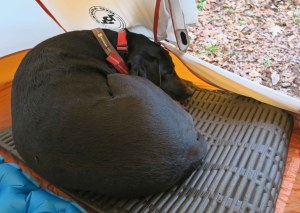 Hiker-dog enjoyed a nap early in our second evening as a soft rain began to fall. Stronger storms and a beautiful lightning show followed later during the night, although not enough to raise the level of Salt Fork or Spirits Creek by more than an inch. 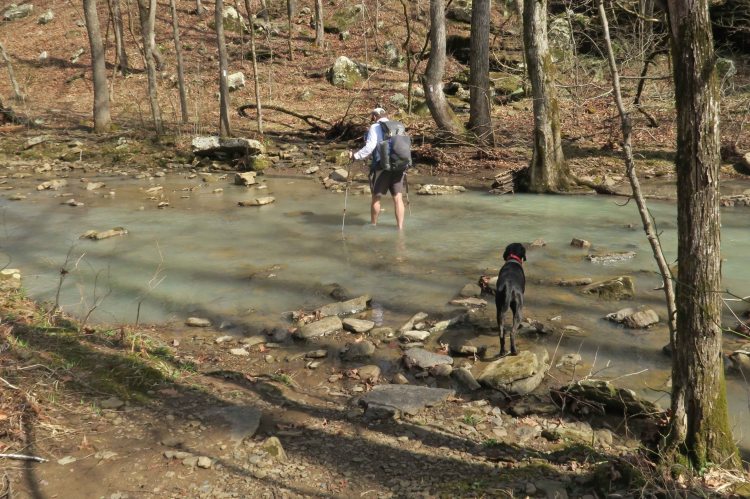 As Nick crossed Spirits Creek, I thought back to my thru-hike with Bob a few years ago. A heavy rain raised the creek level enough to cause us to pay careful attention while crossing. Never the same trail twice… 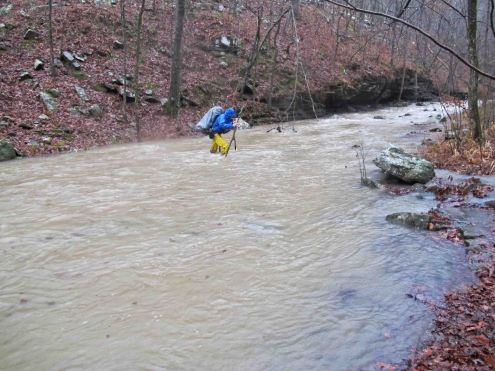 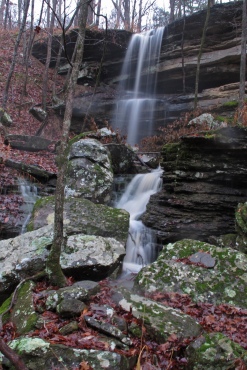 Below is another example of how different the same trail can be depending on conditions. Early in our hike, the Shepherd Springs Waterfall was a trickle in bright sunshine. On a previous visit during a wet springtime day, I got one of my favorite photos of this same waterfall. Part of the pleasure of the OHT is repeated visits during varied conditions and seasons. In the Ozarks, just when you think you know a trail, you realize it has something new to reveal. 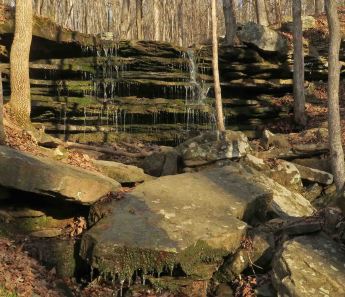 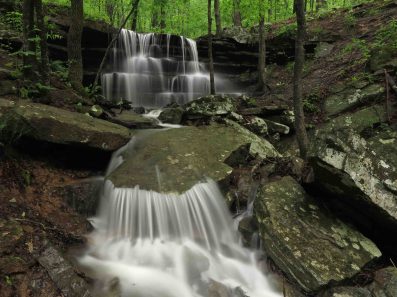 Word of thanks to Ozark Highlands Trail Association volunteers: The photo below right shows the obvious work of trail maintenance volunteers who hike in with chainsaws and cut out obstacles. The photo on the left shows a full day’s work by several volunteers although it would be easy to walk by without notice. At one time, water flowed across the trail continually washing it out and making this a difficult spot. Volunteers trenched an alternative route for the water, directing it away from the trail and toward a culvert that channels water under the adjacent road. They’d be proud of how well this erosion fix is working. 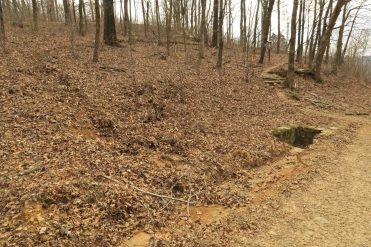 Drainage trench sweeps down on the left. 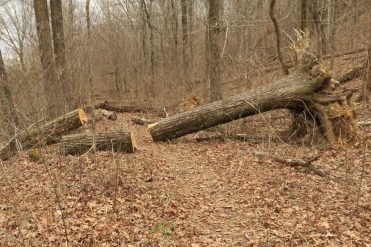 A large tree across the railroad bed section