Mike next to Rattle Snake Falls

Mike explored this area alone a while back. It had been several years since I visited this spot. I did so by walking the Ozark Highlands Trail (OHT) from Dockery Gap and following Hurricane Creek downstream from where the trail crosses the creek.

I was pleased when he asked if Hiker-dog and I would like to tag along and looked forward to seeing the falls from a different approach. And no, we didn’t see any rattle snakes.

After exploring the falls and surrounding bluffs in the late afternoon light, we followed an old jeep road up above the valley to the stream that feeds the falls. Mike said, “I wonder what’s up around that bend in the creek.” With that, we spent a few minutes walking upstream taking in some nice cascades and reflective pools.

As we headed back toward Mike’s truck, I asked if I could run back down into the valley to get some photos of the falls in a different light. Mike explored the top of Rattle Snake Falls while I photographed below.

After the sun went behind the Dockery Gap ridge to the west, Rattle Snake Falls took on a softer look and temperatures dropped. 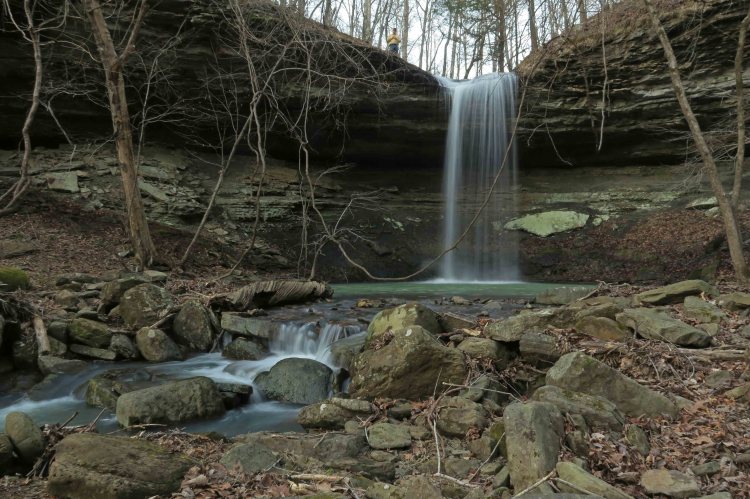 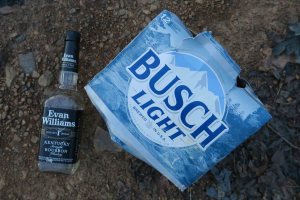 When we met back up at the jeep road, we picked up some trash at a nearby campsite. I said this was our small admission price to the beauty down in the valley and a way of giving back.

When I noticed the brand of the beer, I had to laugh. It seems like litterbugs always drink Busch Beer. I never find IPA or Guinness cans trashing up the Ozarks.

2 thoughts on “Rattle Snake Falls on a warm winter day”