Sharing the joys of down layering

The next best thing to walking the trails is talking the trails. I had a great time with the Friends of Hobbs State Park on Sunday sharing my thru-hike of the Ozark Highlands Trail and Hiker-dog’s story. A young man from the audience assisted me by unpacking my pack as I described changes that resulted in a lighter load. I let him try my down vest, but he shed it pretty quickly due to its warmth.

After sharing my children’s book intended for second graders, Hiker-dog entered the room at the end. She enjoyed some petting and then curling up on the floor as the program continued. 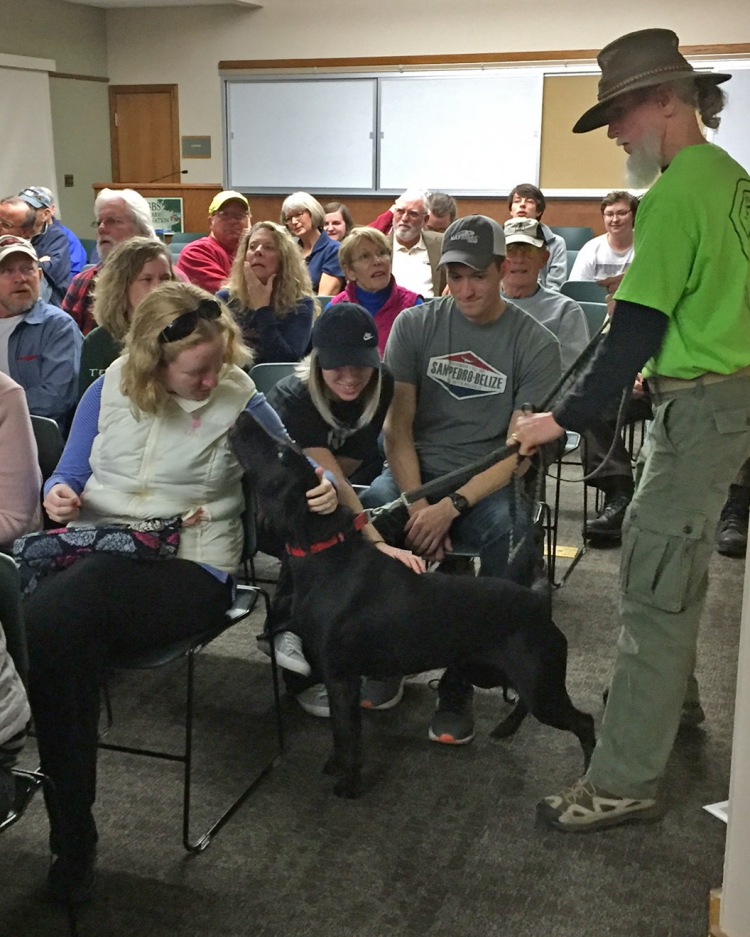 Just under ninety were in the audience. They were responsive, asking good questions and sharing their enthusiasm. The hour flew by!

Sallyann Brown, a fly casing instructor, heads up the Friends of Hobbs programs and always makes folks feel comfortable. When I presented the John Muir Trail in September, she made me promise to bring Hiker-dog if I returned.

Hiker-dog enjoyed the attention. I enjoyed signing copies of my book, Five Star Trails: The Ozarks, and talking trails with folks after the program.

Below you’ll find the Friends of Hobbs Speaker Series for 2018. 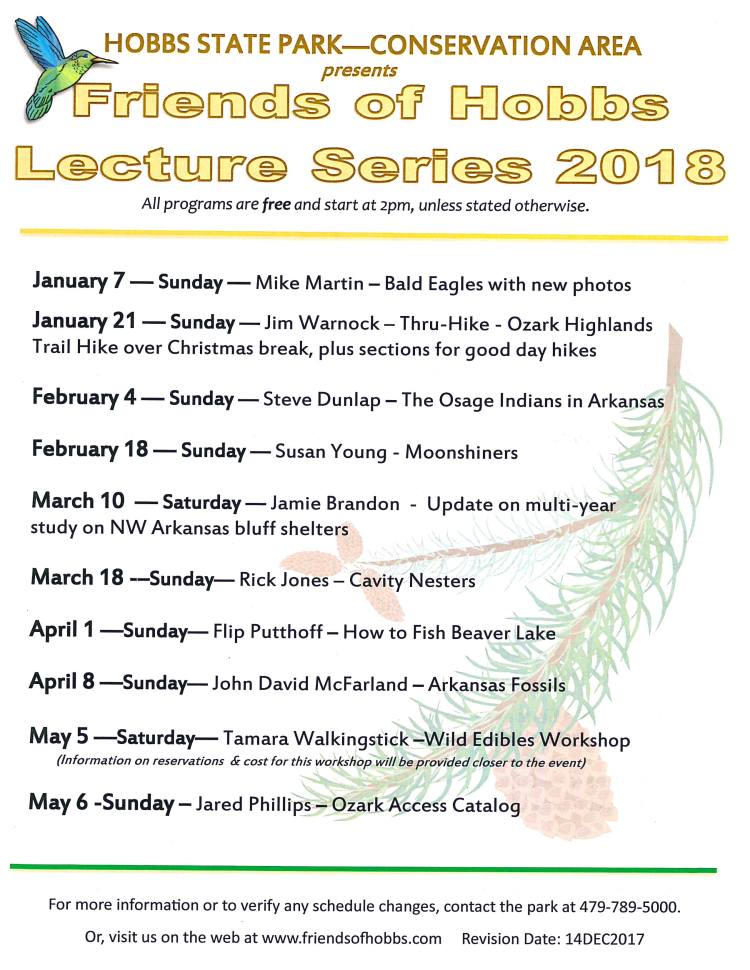 During a phone visit with Kyle Kellams of KUAF, I mentioned how hiking and writing about trails go together for me. I couldn’t imagine doing one without the other. He said, “So, in addition to being a thru-hiker, you’re a ‘thru-writer.'” I thought, what a cool trail name that would be!

An extension to writing about trails is speaking about them. Writing Five Star Trails: The Ozarks has opened many opportunities to share.

Last weekend, I presented to a group of 68 folks at Hobbs State Park, close to Beaver Lake in Rogers, Arkansas. The group was diverse and included several trail runners, a few experienced thru-hikers, many day hikers, and a 99-year old who’d hiked many miles. She asked a good question about water availability on the John Muir Trail.

This coming Friday at 7 p.m., I’ll be sharing at the Springfield Conservation Nature Center. I catch myself wondering what questions they will have. Here are a few often asked.

Looking forward to questions and conversations with other souls who love hiking and the outdoors! If you need a presenter for a group, I’ll jump at the chance to share. All I need is a darkened room for viewing photos and a power outlet. Contact me through the Feedback tab at the top of the page.

Sharing with 68 folks at Hobbs State Park – “Pack this, not that: a few lessons from the JMT.”

Here’s a pdf of the flier if you’d like to print or forward and share for this Friday’s session.  Five Star Trails Poster 092917 Springfield Nat Center

I’m looking forward to presenting the John Muir Trail and my book, The Ozarks, at Hobbs State Park! Please share with all who love the outdoors. A pdf is below the photo in case you’d like to print a flier.

Here’s a link to the Hobbs State Park description of the program. I’m honored to share in such a beautiful location!

Long Distance Hiking: Taking a Break or Getting Broken

Here’s a pdf of the flier if you’d like to print and share. Five Star Trails Poster 092417 Hobbs State Park