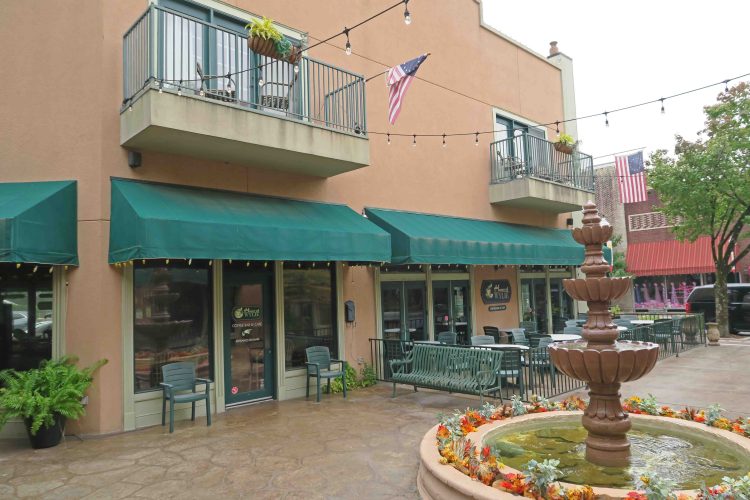 We stayed at the Downtown Guest Quarters in El Dorado, Arkansas, a while back for my high school reunion. We didn’t know what to expect but were pleasantly surprised at how much we enjoyed being right downtown. Several walks punctuated our days as we enjoyed seeing both historic and new aspects of my hometown.

As you can tell, we enjoyed our little deck and the bird’s eye view of the area where we spent so many years while living and working in El Dorado. Our room was situated above the House of Wylie Coffee Bar and Cafe, a great little place I’d visited many times. It was nice to see them still going strong after more than twenty years. 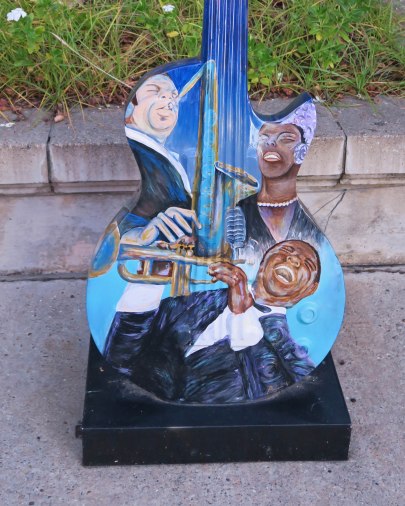 Downtown El Dorado is made for pedestrians with sidewalks, wide roads, and lots of shops. Artwork featured guitars and music themes, probably a nod to the annual Music Fest that began in the early 1990s and has expanded as the Murphy Arts District had developed. At one time, there were oil barrel sculptures, but I can’t remember seeing them on this trip.

We were impressed with the outdoor performance facility that is part of the new Murphy Arts District (MAD). This photo doesn’t do it justice, but it’s a huge stage with an expansive lawn for seating. The MAD includes a beautiful restaurant, indoor performance area, and ice skating rink.

Renovation of the old Rialto Theatre is part of the Murphy Arts District development plan. This made me very happy. I saw lots of great movies in that theater, most memorably, The Longest Day that I watched with my father when I was seven.

Years later, after the theater was in dilapidated condition, the South Arkansas Symphony performed there to help raise funds for repair. By the end of the night, we thought the place might be haunted. One of the temporary lights illuminating the stage fell for no apparent reason. A violinist fell on the stairs next to the stage, breaking her leg and damaging her violin. I remember her being more disturbed about the violin than her leg.

I found a gap in the construction screen and captured a view of the theater entrance, bringing back lots of memories.

A newspaper spread for the 1929 opening of the Rialto Theatre is on display in the Downtown Guest Quarters. The Rialto was built for live performances with a stage and orchestra pit. I remember seeing a pipe organ in the pit that I’m guessing was once used to accompany silent movies or cartoons.

Across the street from the Rialto is one of several historic monuments commemorating the significance of the oil industry in El Dorado’s past.

Walking in the early morning light is always a treat and avoids the crowds. 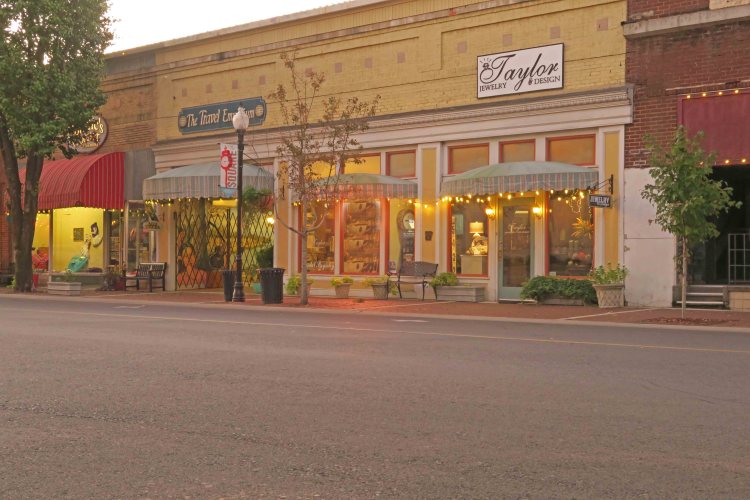 Denise Taylor has Taylor Jewelry and is known for her masterful jewelry designs. I grew up with her husband, Gerald, a talented craftsman, and great person.

If you want to walk among the trees, El Dorado has what I think must be the smallest state park (12 acres) in Arkansas, South Arkansas Arboretum. One of our reunion events was there, so Becca and I enjoyed walking the trails.

I thought of Carl Amason, who was instrumental in the development of the South Arkansas Arboretum, from design to plant selection, identification, giving tours and digging in the dirt.

As a child, I visited Carl’s 40-acre home in Calion several times with my parents. Walking the property and listening to him share his plants made me realize how passionate someone can be about the natural world. Having known him personally, I found it interesting to read his obituary and learn a little more about his influence. His name also appears at the entrance to Garvin Woodland Gardens in Hot Springs for his contribution and expertise.

Just a few blocks from downtown we walked past the old Warner Brown Hospital, no longer in operation. I wanted to stop by and have a look while it’s still standing. I was born there, but the reason I wanted to revisit the location was a memory I have from childhood.

I had strep infection that turned into rheumatic fever on Christmas morning of third grade. Dr. Cooper was concerned about me because I was pretty down after two weeks in the hospital. Then, one afternoon he entered my room and couldn’t believe the change in my mood. He asked my mother what had happened.

Earlier that day, D’Arcy Stephens, a good friend had come to see me at the hospital…from a distance. Children weren’t allowed on patient floors, so my parents gave him one of my walkie talkies and brought the other one to my room. He stood on the lawn below my third-floor room while I sat in the window, and we had a great time making up childhood games to explain our situation, something to do with military spies, I think. After that special time with my friend, the emotional depression was lifted.

I lost track of him again until making contact with his sister, Jane, a few months ago. She let me know that D’Arcy had died. He’d led a great life, but I felt some regret at not having kept in touch.

D’Arcy on the far right with me second from right. Behind us is Bill Colvin our Scout Master and a great mentor to all of us.

I credit D’Arcy, my father, and the Boy Scouts with helping me feel confident in the outdoors as a kid. Our Scout Master, Bill Colvin, was patient with us and always set the highest example of integrity, whether completing the requirements for a merit badge or following through on a promise. 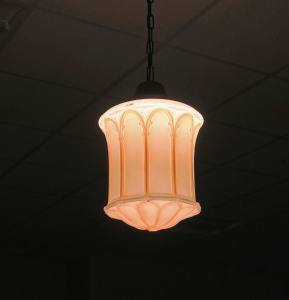 Light fixture from my childhood church

That evening, we visited the family church. It was a fitting end to this memory walk day and a reminder of how memories can be conjured up by an image or sound. It was also a reminder of the importance of a sense of place for children. I’m thankful for my hometown. I’m proud of what it has become and look forward to seeing its future.