The end of a climb in the Richland Creek Wilderness Area

I mentioned in the preface of my Ozarks trail guide that medical advancements cause me to hike with a thankful heart, literally.

When I was 16, Dr. Henry Rogers, our family doctor, discovered the blood pressure between my arms and lower legs was different during a routine exam. He recommended some tests in Little Rock. The doctor there referred me to Houston for more tests.

I remember with fascination as doctors conducted a catheterization to inspect the valves and chambers of my heart. I was awake and could see the small tube as it moved through my heart.

The next day, Dr. Denton Cooley and an entourage of interns, whispering in several languages, entered my room. He listened to my heart with his stethoscope, turned to my parents and said, “We’ll fix him up in the morning.” He was pleasant but moved on quickly.

The following morning he corrected the coarctation of my aorta, a routine surgery for him. Without this procedure, my life would probably have been cut short as a young adult.

Following a short time of recovery, I was able to ride my bike, play sports, march in the high school band, and years later, march through the Ozarks and other beautiful locations. I sent Dr. Cooley a thank you note when I completed my first 100-mile bicycle ride in the 1990s.

Recently I was overcome with a sense of gratitude while climbing a hill in the Ozarks. This led me to search for information about Denton Cooley who died at the age of 96 in 2016.  I discovered a couple of videos and his Heart Institute that I will link below. 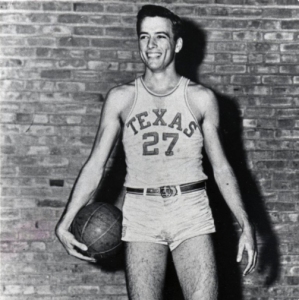 Seeing video clips of Dr. Cooley made it seem like yesterday that he said, “We’ll fix him in the morning.” He possessed confidence without arrogance, and I learned from the video that he cared greatly about his patients.

He also valued teaching and research, making sure that the Texas Heart Institute was a teaching institution. I learned that he played basketball in high school and college. As an adult, he played upright bass in a band called The Heartbeats.

I’m thankful that innovations Dr. Cooley was a part of made much of what I’ve enjoyed in life possible. Dr. Cooley thought he was in the right place at the right time. I agree!

As an insecure teenager, I was bothered by the 7-inch scar on the left side of my rib cage. Today I’m thankful for that scar and the health that resulted from the skillful minds and hands of medical professionals. I’d like to give a word of thanks to Dr. Henry Rogers, Dr. Denton Cooley, and my current physician, Dr. Ron Schlabach, for helping me stay on the trails!

Video interview of Dr. Cooley from 1991 – This is one hour in length but filled with many lessons from his life and example.

Five-minute video interview of Dr. Cooley three years prior to his death. This included several photos from developments over the years.

“Like Something the Lord Made” – the story of Vivian Thomas, lab technician for Dr. Alfred Blaylock. Dr. Cooley worked directly with Dr. Blaylock and Mr. Thomas during the time the procedure to correct blue baby syndrome was developed at John Hopkins Medical School.