As I hiked east from Dockery Gap to check my section of trail a dad and his four sons approached from the opposite direction.   They had a haggard and disheveled look as they lumbered up the trail loaded down with one-gallon plastic milk jugs filled with cloudy water and overloaded backpacks.  One of the sons carried a rifle presumably for protection from wild bears.

The gun made me nervous, but I relaxed when the dad spoke.  He explained that they had camped at Jack Creek with plans to hike to White Rock Mountain, but now they were wondering how to hike out and where they might get cell phone service to call mom to come get them.  I took my map out and showed them the road they were approaching and how to walk toward civilization.  They explained that their water filter wasn’t working correctly, hence the murky water jugs.  They’d not slept well, were overheated and exhausted.  As I continued down the trail, I thought they’d made the right decision in exiting the forest.

Approaching Jack Creek less than a mile later, I saw smoke and a burning campfire.  There was a hammock tied between two trees next to the creek and trash everywhere.  Thinking someone must still be occupying the site I called out, but there was no response.  It gradually dawned on me that this was the camp left by my exhausted friends who’d just asked for directions.  I extinguished the fire, kicking a large aerosol can of insect spray out of the coals and then collected the trash.

I continued down the trail picking up more trash at each creek crossing.  It appeared that these young men and their dad deposited trash at every rest stop.  After doing a little maintenance I returned to the trashy camp, scattered the now cooled fire ring, and bagged the trash I’d collected earlier.  Then I noticed scaring on a tree next to the creek where they had chopped it with an ax for no apparent reason.  This began to feel like a crime scene. 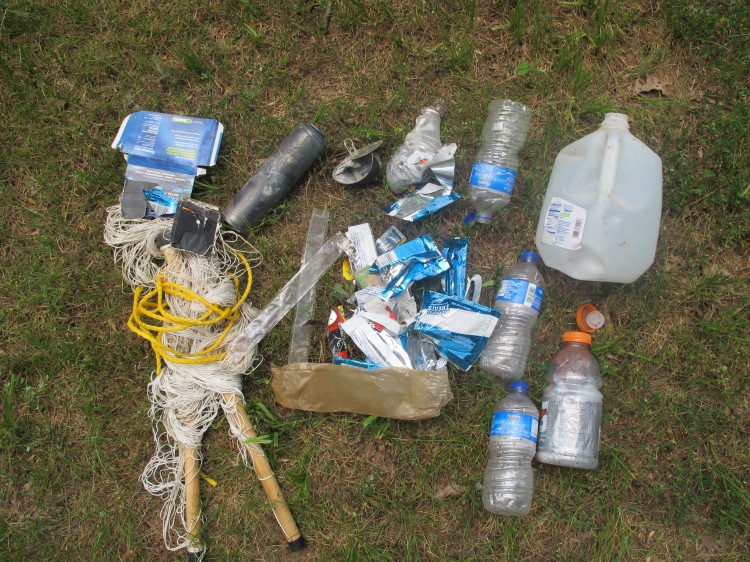 Some of the trash collected at the site. Notice the burned aerosol can.

I had visions of driving up on these fellows as they walked along the road and what I would like to say but then considered the rifle and thought a more diplomatic approach might be best.  As I hiked up the trail away from the scene of the crime, I rehearsed the discussion I would have about the beauty of the Ozark National Forest and how important it is that we care for it and pass it on to our children.  I wished for words to help these men discover a better way to treat the wilderness but, in reality, it seemed futile to try to convert remorseless criminals who enter the forest for recreation and harm it by their very presence.

As it turned out, by the time I arrived at the trailhead to throw my bag of trash in the Jeep, the father and his sons were nowhere to be seen.  I do wish I could have that conversation, but I take comfort in the knowledge that I probably witnessed the conclusion of their first and last backpacking trip on the Ozark Highlands Trail.  If I just had some assurance that they don’t have access to four-wheelers I’d feel a whole lot better.

9 thoughts on “Jack Creek Criminals on the Ozark Highlands Trail”