How is it that I’m hiking through deep woods after a 15-minute drive from the touristy city of Branson, Missouri? Along side of a beautiful creek and 14-foot waterfall, the speed of driving through development on Hwy 65 gives way to a peaceful walking pace.

It was dark, and we had the trail all to ourselves. As I walked with my headlamp, I found myself humming the theme song from The Beverly Hillbillies, but I’ll explain that association later.

I have felt guilty for living in Western Arkansas fourteen years without visiting Branson, so I contacted one of my Missouri hiking buddies and asked about trails in the area. He said he avoided tourist traps and hadn’t hiked the Ruth and Paul Henning Conservation Area. I felt less guilt, but more concern that this area might not be worth visiting. Thankfully, I was wrong. 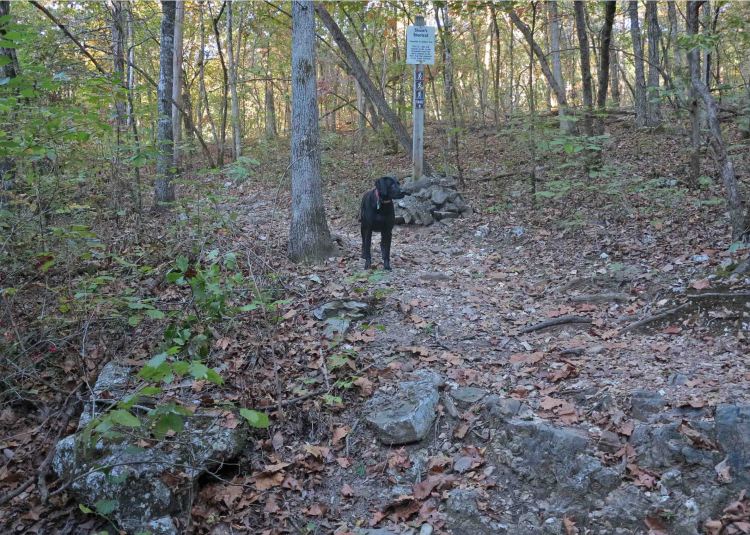 Leashed pets are allowed, so Hiker enjoyed this trail. Since we were alone, I let her run a few times as we made our way around the 3.6-mile trail.

On the Homesteader’s Trail, you’ll see evidence of early inhabitants of the area. The trail passes abandoned wells, rock walls, and ponds used by early homesteaders. One of the wells had a good level of water which was surprising since the creeks were dry. Another well was pretty dry, so I lowered my camera through the grill to take a picture. I wrapped the strap around my wrist to be sure I didn’t add another historic artifact to the well.

The trail passes through a glade area. You’ll climb through this area. We warmed up quickly before returning to the woods.

Glade on the Homesteader’s Trail

Now that I know about this area, I might return to hear some live music and enjoy area restaurants with my wife. There are lots of things to do in Branson, but one of my favorites will be to hike this trail. We’ll watch the weather and return to the Ruth and Paul Henning Conservation Area during wetter times with camera and tripod. That waterfall will be calling me back.

Ruth and Paul Henning provided the land that is now a Conservation Area just north of Branson, Missouri. Paul Henning was a writer and producer, responsible for several television classics like the Beverly Hillbillies, Green Acres, and Petticoat Junction.   I enjoyed hearing his discussion of the creation of the Beverly Hillbillies in the following clip. He seemed like a down-to-earth person, just the type of fellow who would think to preserve an area like this. He died in 2005, but would be pleased to know his gift is being enjoyed and protected.