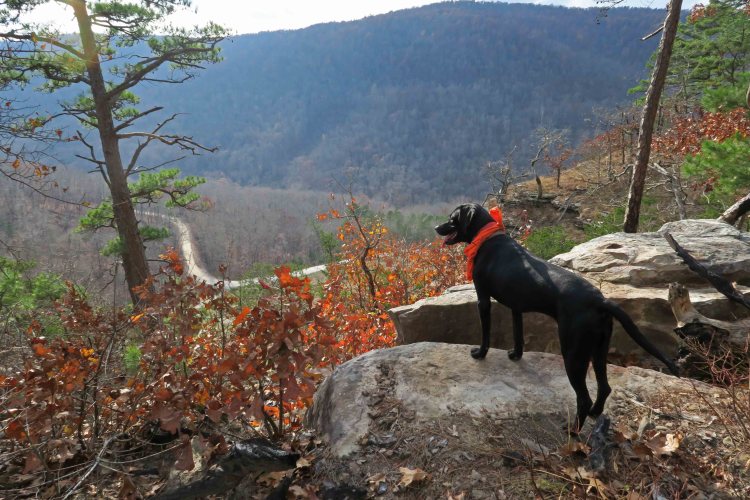 The view over a landslide site next to Richland Creek Wilderness Area.

In January of 2014, Bob and I met a black Lab close to mile 138 on the Ozark Highlands Trail (OHT). If you want to know that story, skim this little book I wrote for children at my school, Gift From the Ozarks.

Since joining our family, Hiker-dog has covered most of the OHT but still lacked the miles from Fairview Trailhead on Hwy 7, east to where we found her. Hiking buddy, Eric, is working his way through the OHT and needed this section. Bob completed our group, being the first to meet Hiker-dog a few years ago. 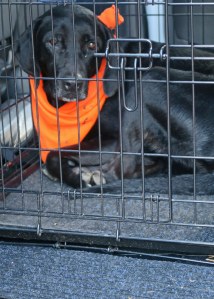 Eric and I drove to Richland Creek Campground to leave my truck, then shuttle back to Fairview to meet Bob. Hiker-dog enjoyed the ride and seemed to anticipate some good hiking as we drove next to the Richland Creek Wilderness Area.

We laughed at how hyper she was in camp. I took her on a short out-and-back walk in an attempt to calm her down but she needed more, and there hadn’t been time that day with all the shuttle driving. Since others were camping nearby, I put Hiker-dog’s mat inside the tent and was thankful when she curled up and slept all night.

Saturday’s hike was pleasant as we crossed old oak bore and ice damage saying a word of thanks for trail volunteers who keep this section passable. The canopy improves after a couple of miles, and the beauty of the Ozarks is revealed as you pass several creeks. As we stopped for lunch, two of the only other backpackers we would meet stopped for a short visit. 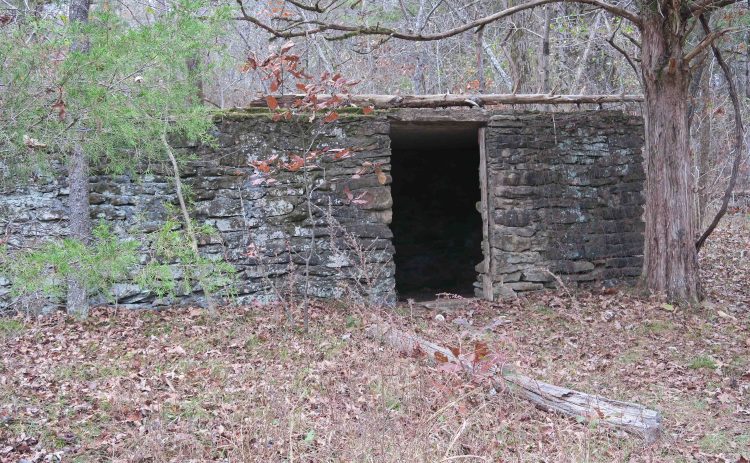 I’ve hiked through the remnants of the CCC Camp before but never spent the night. This was a treat, and water access was easy. We enjoyed exploring before selecting tent sites. 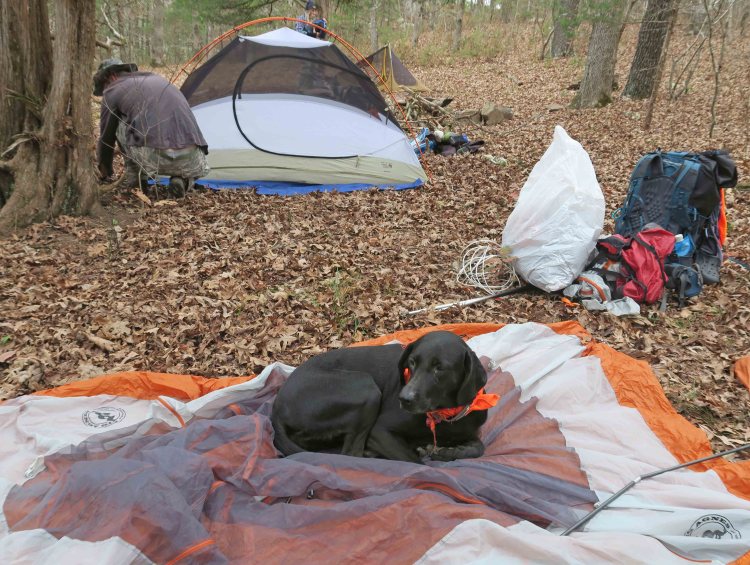 Someone was impatient with tent setup and curled up for a short nap.

After supper, we played with our cameras while warming by a fast burning cedar wood fire. Popping cinders left orange streaks and sometimes caused alarm when they landed on a leg or foot.

We experimented with some light painting to bring out the foreground and trees.

Lots of cinder streamers fly during 15-second exposures. Perhaps the ghostly remnants from the CCC structures made us wish for visitors from the past. Looks like some spirits stopped by as we sat by the fire.

Eric experimented with some light writing. Who would think three grown men could be so entertained by a couple of small cameras and headlamps!

The next morning, we explored a bluff area next to the camp. The open woods surrounding the CCC Camp were a joy for a well-rested Hiker-dog.

We came to the place we first met Hiker-dog close to mile 138 (now near 137 with route changes on the OHT). A deer from the previous day’s hunt was lying about fifty yards away, and Hiker-dog quickly found what the hunter could not. I thought about Hiker-dog’s condition just under four years ago and what rich meals this deer would have provided. 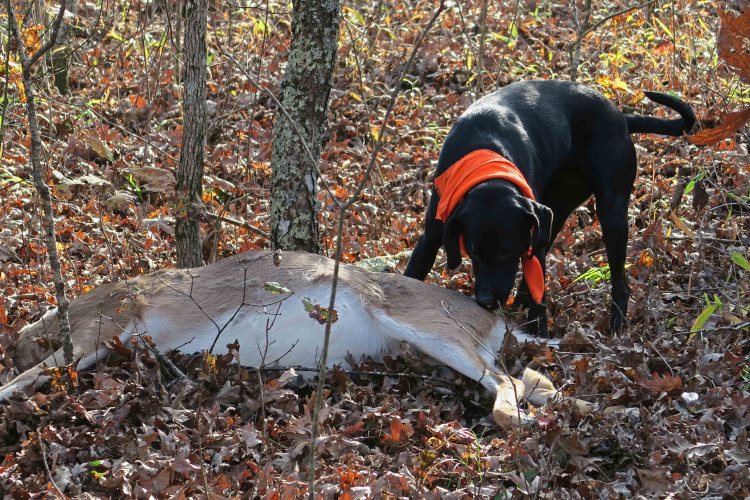 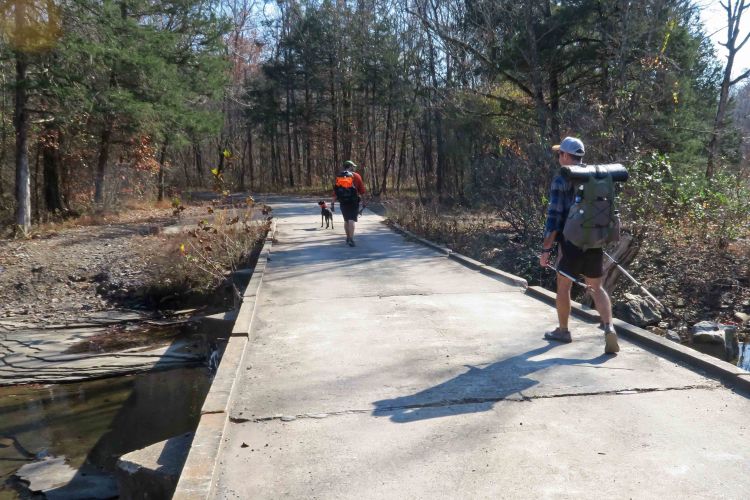 We came across our backpacking friends from the previous day and had a nice lunch as Hiker-dog fought the desire for a nap in the warm sunshine.

Hiking along Falling Water Creek was a pleasure until we came to an arrow indicating the bypass up and over the site of an old landslide. We huffed and puffed along the steep hillside, but the bluff above provided scenic views into the Richland Creek Wilderness Area. From our thru-hike a few years ago, I didn’t remember this section’s steepness. It was probably blocked from my memory because of the pain. 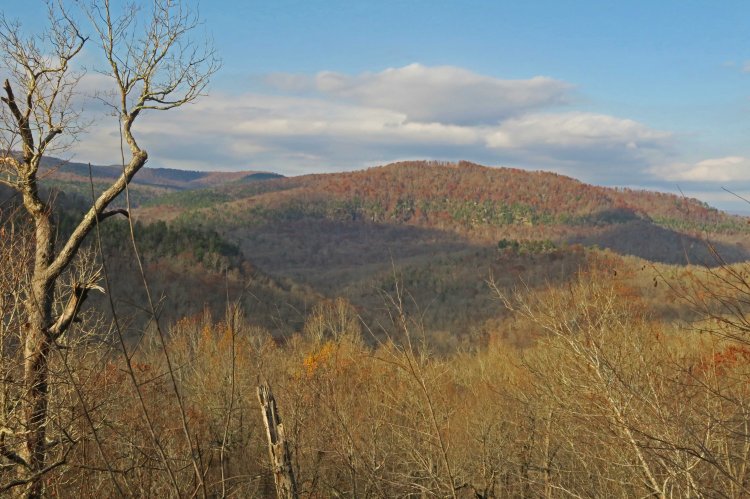 One of many views from the bluff.

As we arrived at Richland Creek Campground to complete our 20-mile trek, Hiker-dog was nowhere to be seen. I heard children’s voices next to the creek and thought she might have been drawn to the sound, but she popped out of the woods a few minutes later, still strong and ready for more. I thought about how fortunate we both were to cross paths at mile 137 of what would become our adoption trail on that cold January day. 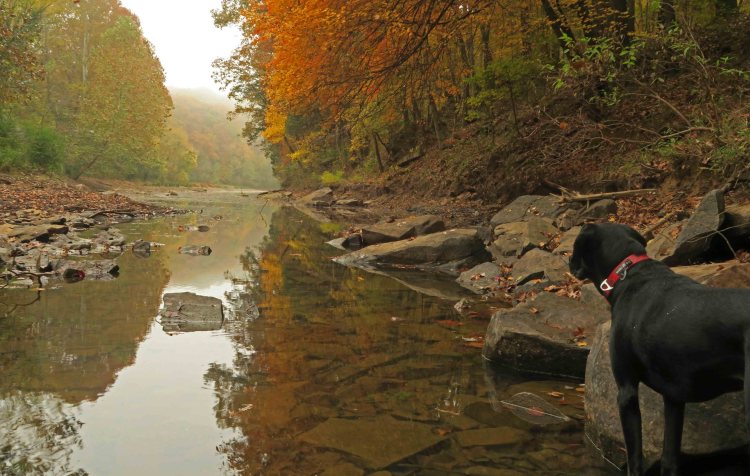