To friends, I’ve said, “The older I get, the lighter my pack.” Over the last 20 years, I’ve gone from a very heavy backpack to much lighter backpack. I say “very heavy” because I never actually weighed it or the items inside back then. I’d guess 45-50 pounds because I remember hoisting it to my knee before lifting it to my shoulders in a second move. I also remember the smothered feeling I felt while breathing under its weight.

Moving to lighter loads has been a process over time. By the time we did the John Muir Trail in 2016, my pack was at 32-36 pounds. That included a 2-pound bear canister and food for up to nine days.

This week I tried my ultralight sleep system and shelter. I considered it a “shake-down” hike to prepare for the last 63 miles of the Ouachita Trail coming up soon. My loaded pack weighed 18 pounds with food and water. Base weight (without food and water) was 14 pounds. There’s no heaving this pack, just a smooth swing from the ground to the shoulders.  I’d love to shave off more and approach a 12-pound base weight. It might be easier to lose a couple of pounds in bodyweight.

Shores Lake White Rock Mountain Loop is one of my favorite routes and close to home. After dinner, Hiker-dog and I drove to the trailhead as the sun dropped low in the sky.

This treasured Bliss Spring that crosses the trail required that I pause for a photo, so Hiker-dog waited patiently. 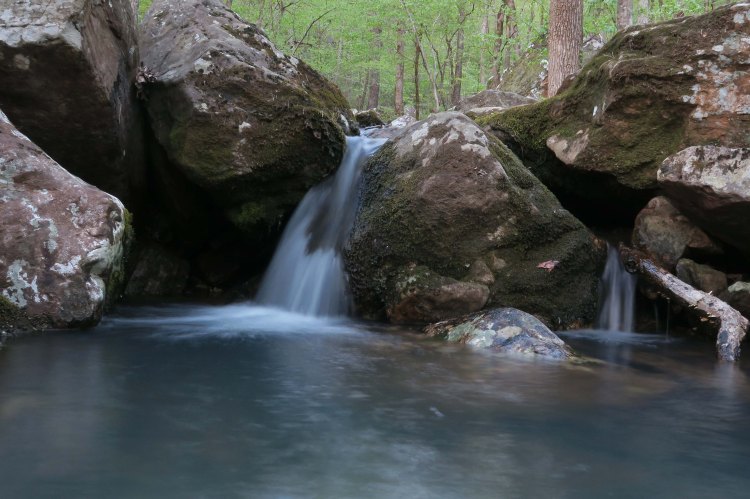 I love the waterfall that roars softly below in White Rock Creek close to mile 2 but knew a side hike down was out of the question in the fading light. This waterfall was one of my earliest pleasing waterfall photos. I thought about the time I spent there as I hiked past the spur trail.

Waterfall on White Rock Mt. Creek from several years ago. 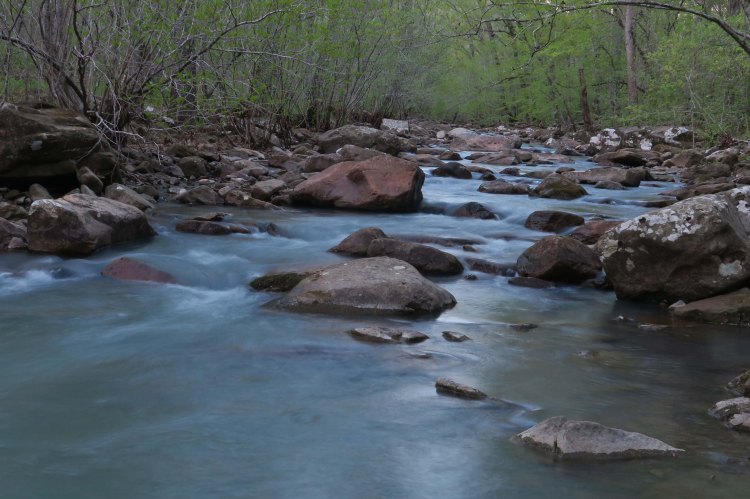 As we approached White Rock Falls, I knew we were close to home for the night. I used a rock as a tripod and took the photo below before continuing across the creek to a campsite close to mile 3. I thought we might stealth camp away from the trail, but the undergrowth in this area changed my mind.

Photo in fading light from a rock tripod

I sat up the tarp by headlamp. It went nicely since I didn’t have to avoid rocks on the site. This tarp is 7 ounces and durable, a far cry from the 5-pound tent I used 20 years ago. After feeding Hiker-dog on a nearby flat rock, I crawled under the quilt. Soon I felt the familiar weight of Hiker-dog curled up next to my feet. She slept soundly all night. I was distracted a few minutes by moonlight through the translucent tarp but then fell asleep in the cool air.

The next morning we packed and began walking by headlamp. It was fun to see the sunrise as we walked. After a breakfast stop, we continued the loop clockwise. Where I most benefited from a lighter load was on the climb up the first couple of miles toward White Rock Mountain. Speaking of “lighter,” I failed to pack one so coffee was cold. Forgetting a lighter was an embarrassing oversight and reminded me it’s important to check that list before I leave home.

The loop trail follows a portion of the Ozark Highlands Trail (OHT) where you’ll see both blue and white blazes. When we reached the OHT mile marker 19, in earshot of Salt Fork Creek, we turned to the south and began the east side of the loop. A muted sun lit distant hillsides through the clouds, and we had several small rain showers as we walked along. 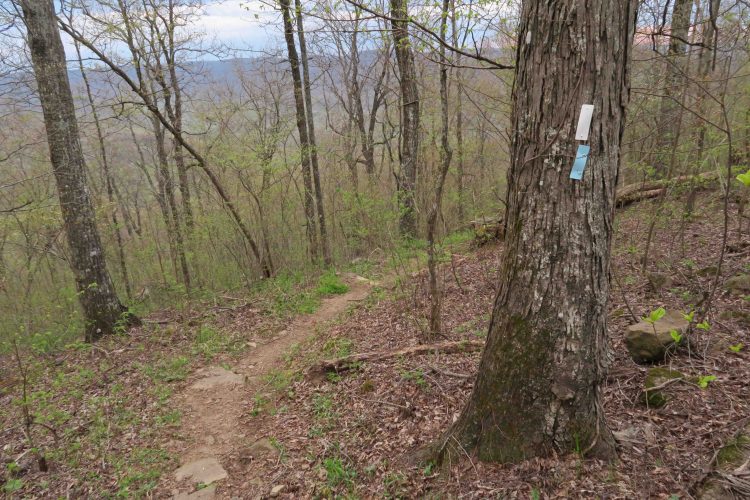 Mayapples and Dwarf Crested Irises were prolific in many spots. We enjoyed pausing to enjoy the color and variety. With my light pack, I never felt the urge to take it off. Click on the wildflower images for plant names. Yes, I like Crested Irises a lot… 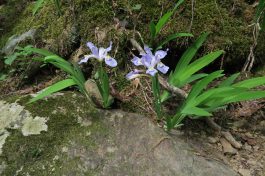 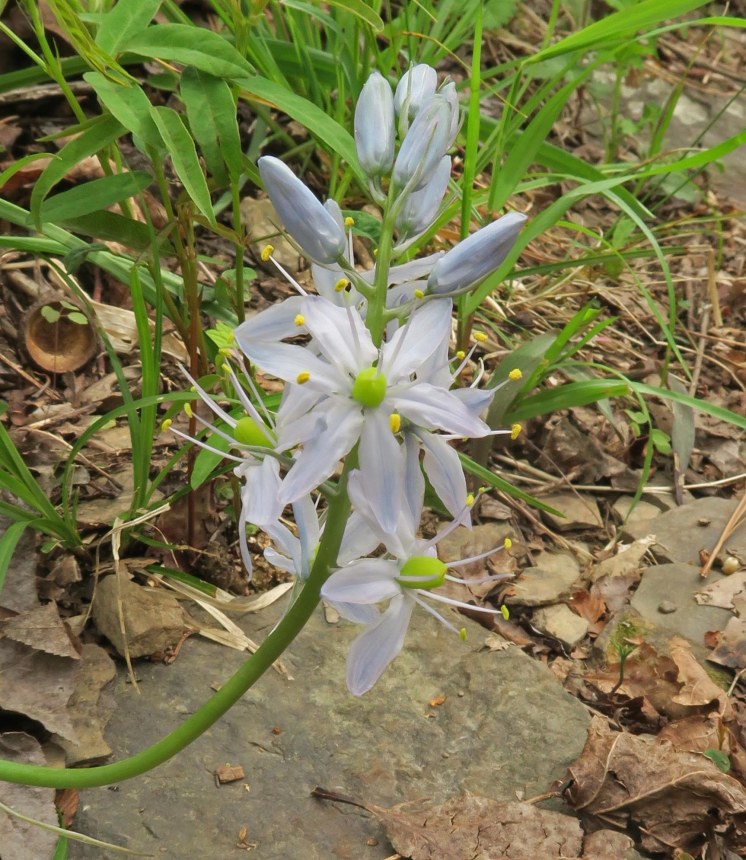 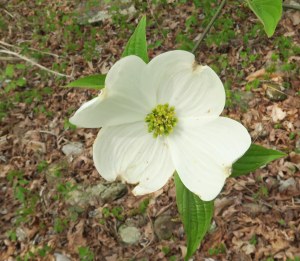 Dogwoods were blooming in all their glory. Their gentle clouds of white popped against the light greens of spring.

Hiker-dog walking past one of many Dogwood trees 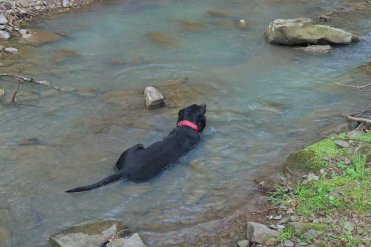 Hiker enjoyed taking a dip to cool off as temperatures rose to the mid-sixties. I filled a water bottle and carried it for the drive home. The next morning I enjoyed a cup of coffee at home from that creek water while planning another hike with my lighter backpack.