I’ve wanted to check my adopted section of the Ozark Highlands Trail for several months but life wouldn’t cooperate, so we were thankful for this time. I love this section and Hike-dog does, too. It was a crisp, clear day and water was running perfectly.

Immediately, I noticed the excellent work done by volunteers with the OHTA recently. Several downed trees on the upper ridge were cut out and made for easy walking.

The first Jack Creek crossing was almost a wet crossing but it was fairly easy to step across rocks. A favorite feature of this 4-mile section is that you cross a series of small streams that flow down into Jack Creek. Each of these streams is a visual highlight and different in every season.

Hiker-dog seemed to enjoy having this rock in the middle of one of the small drainages we crossed. 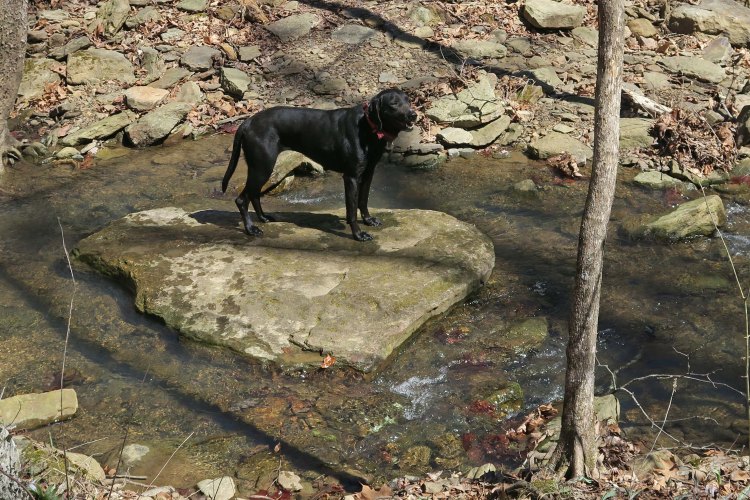 The water in Jack Creek was flowing clear. We met about seven young backpackers having lunch at the nearby campsite. We’d passed a solo teenage backpacker and a father and 9-year old son duo for a total of 10 hiker sightings on my small section. It was good to see so many young people on the trail. 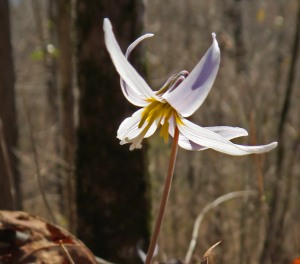 Seeing Trout lilies means springtime is near. These little splashes of color dotted the forest floor. 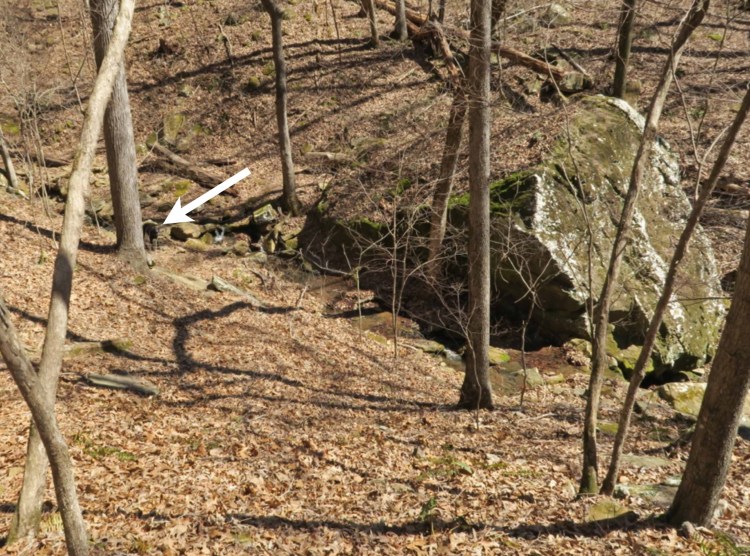 The photo above shows one of the small streams we crossed and a huge boulder that always impresses me. To get an idea about its size, I placed an arrow pointing at Hiker-dog next to a tree for a sense of scale.

I filled my water bottle twice, the first time simply dipping into one of the side streams that flow into Jack Creek. The second refill came from this favorite spot where water usually flows across moss-covered rocks before crossing the trail.

I used a small handsaw to cut a few smaller trees off of the trail and used my GPS to record waypoints for future trips out with OHTA chainsaw pros for larger trees, none of which were major obstacles.

Hiker-dog enjoyed several cooling bathes over the course of the day and she definitely exceeded my 8-miles out-and-back distance with her dashes out through the woods. She and I were both thrilled to do this section of the OHT again!

Consider volunteering! Go to the OHTA website and check under maintenance. Use the maintenance coordinator email to see if there is a section you might want to adopt.

Hiker-dog getting ahead of me

On Friday, April 13th, a tornado damaged several homes and buildings in Mountainburg, Arkansas, about eight miles from my adopted section of the Ozark Highlands Trail. I was anxious to see if winds had caused damage to the woods, so Saturday morning Hiker-dog and I headed out, wondering what we’d discover.

What we found was an open trail with temperatures in the mid-40s. It stayed cool all day as the sun peeked from behind puffy clouds. Quite a contrast from the ominous storm clouds of the afternoon before!

I was thankful for little gems that sparkled with color alongside the trail. In spite of the cold, several patches of Mayapples greeted us with a few hidden blooms below their leafy umbrellas.

Dwarf Crested Irises were starting to open and share their pinks and purples.

Later in the day, we passed full blooms, their petals raised toward the sunshine.

Because of the influence of my Arkansas Master Naturalists friends, I now read about the plants I see and was interested to learn that Native Americans used the roots of this Iris for medicinal ointment and tea.

Just as I was sensing relief that the trail was intact, unnatural objects started to appear. By the end of our 8-mile out-and-back, my daypack was full of hard foam insulation that had blown over from Mountainburg. I tossed the debris and a little trash on the truck floorboard at the end of our hike. 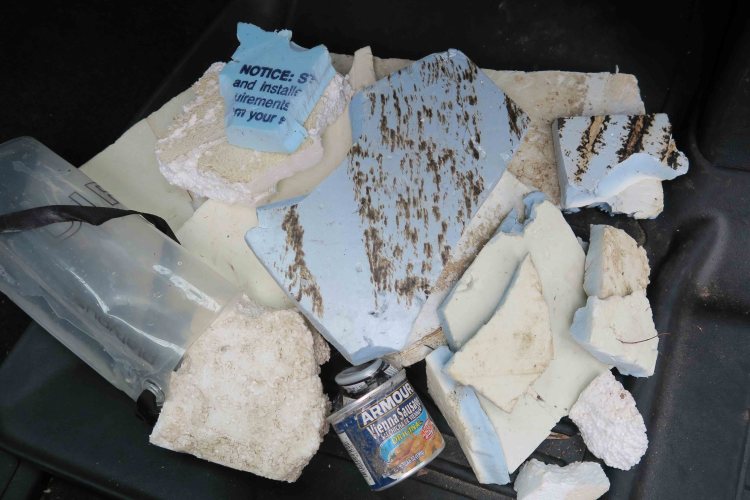 Several pages of text also appeared next to the trail. I found myself reading these little snippets with interest. I photographed each of the pages then slipped them into my pocket. Were they trash or did they add meaning to today’s walk? Probably a little of both. I did think the chapter title on one page was appropriate given what brought it here. 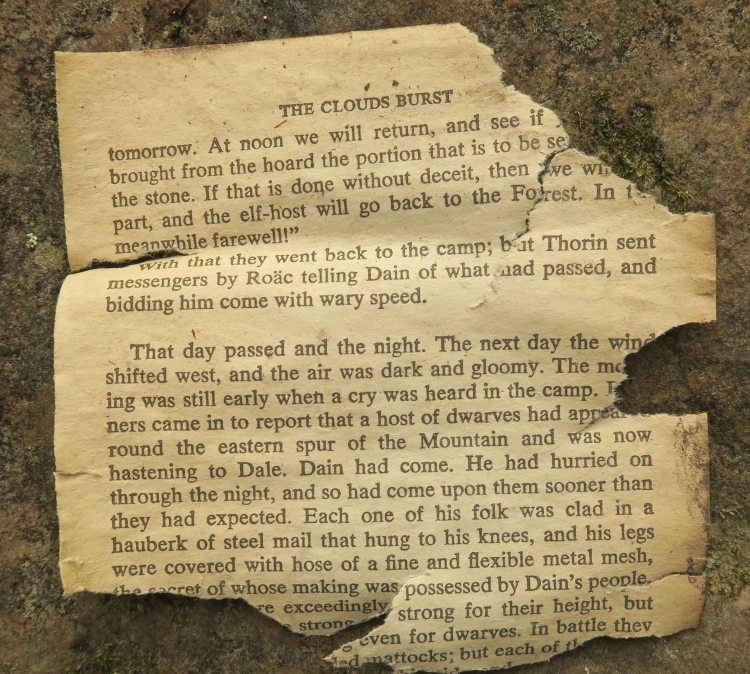 Excerpt from The Hobbit

The first line of this sliver of a page might apply to several backpacking trips from the past when challenges grew with the accumulating miles. 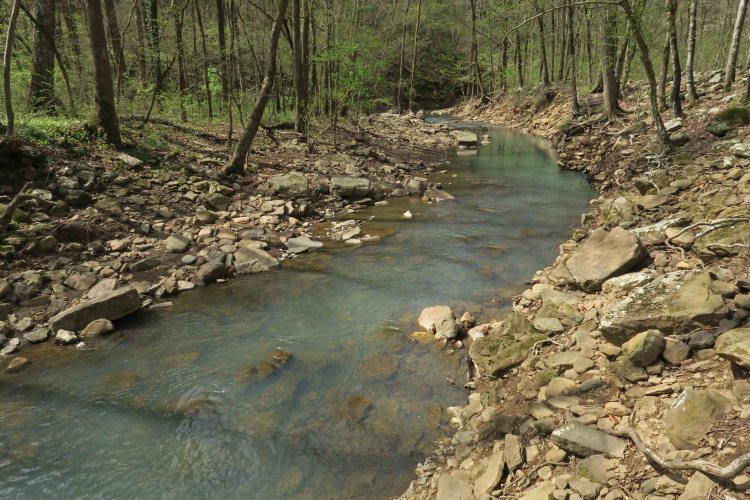 Jack Creek next to a campsite

I was interested to see the campground at mile 5 of the OHT. It’s an easy hike from Lake Fort Smith State Park and gets trashy sometimes. The area was clean today and carefully inspected by Hiker-dog. 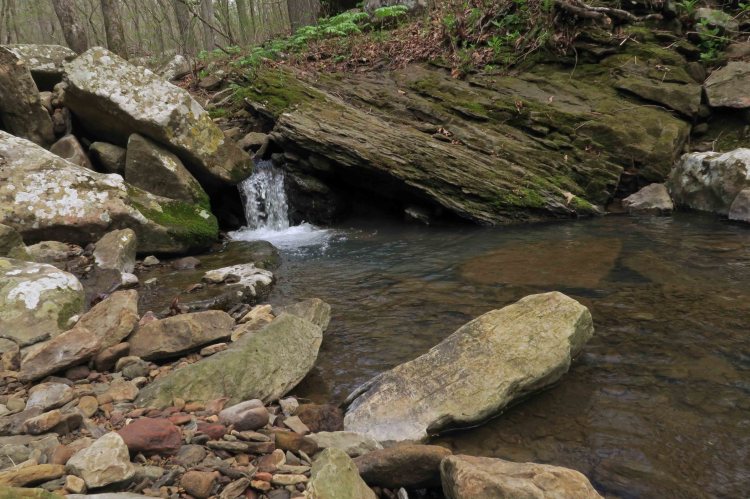 Repeated crossings of tributary streams are a special treat on this section of trail. These pretty drainages all flow into Jack Creek as it makes its way toward Lake Fort Smith. One of my favorite stops crosses a flat rock stream. Its slippery surface is avoided by crossing large boulders downstream. 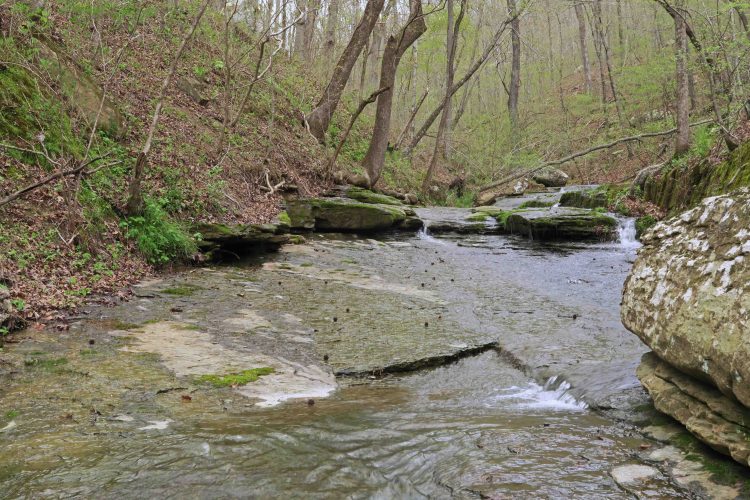 It was a beautiful day to be in the Ozarks. Thankfully, no one was injured by the tornado the previous afternoon. As a bonus, the trail was undamaged other than a few gems (or trash) brought over by strong winds. 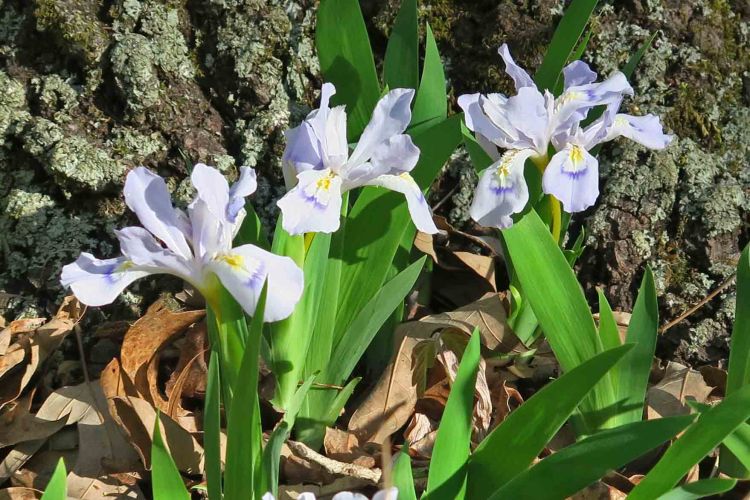 It had been several months since I checked my little adopted section of the Ozark Highlands Trail. My last two visits were in July and then again in September. Mike LeMaster cut a number of trees off of the trail in July and then Steven Parker did some more chainsaw work recently. I’ve had some expert help in maintaining this trail!

This little piece of the OHT has become special to me. It runs from Old Locke Road (FR 1007) at the Dockery’s Gap Trailhead, west to a campsite next to Jack Creek at mile-5 of the OHT.

When the new Lake Fort Smith State Park was being built, this piece of trail was abandoned, and the beginning of the OHT was at Dockery’s Gap. I liked hiking the closed trail and marked sections with survey tape to make the route easier to follow. Sometimes I’d saw small trees off the trail to keep it passable. When this section of trail reopened around 2008 after the completion of the new state park, I adopted the 4-mile section.

About three years ago, I realized just how strong my sense of ownership was when I discovered that some campers had trashed a special spot on the trail. I cleaned it up while cursing under my breath. I describe this incident in Jack Creek Criminals. It felt like a personal attack that someone would have so little respect for “my” section of the OHT!

Today, Hiker-dog and I walked from Dockery’s Gap to Lake Fort Smith State Park where my wife, Becca, would meet us. Wildflowers were popping, creeks were flowing, and the sun was shining through cool, crisp air. It was a magical day and every step held beauty. I felt like I barely knew this trail as if hiking it for the first time.

Sometimes I’ll say, “I’ve done the OHT,” meaning I’ve hiked the 180 miles from Lake Fort Smith to Tyler Bend. I’ve “done” the section from Dockery’s Gap to Lake Fort Smith many times. What I can’t say is “I know this trail.” Today taught me that I never “know” a trail. Each mile has something new to offer every time I walk it. My life would be plenty full with just this little stretch of Ozarks landscape. One good trail is enough!

As I approached Lake Fort Smith, I met a hiker from Joplin. It was his first time on the OHT, and he was pleased with his new map. I enjoyed telling him that he was standing on the section adopted by Kristian Underwood, the cartographer responsible for the OHT maps.

Below are a few photos from today’s hike. 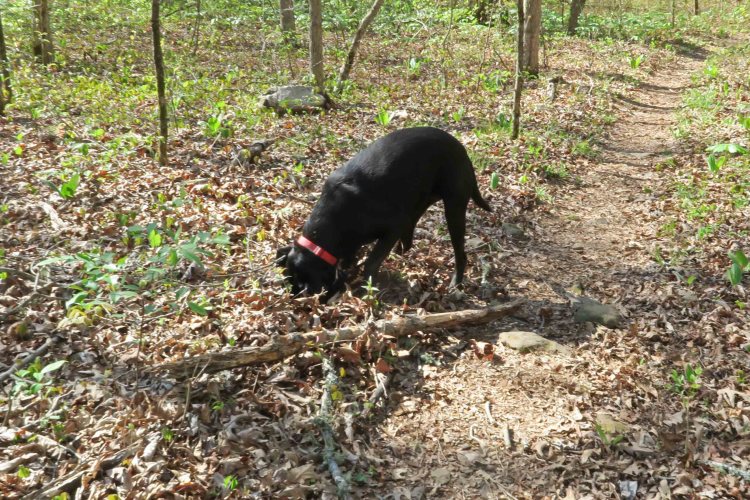 Hiker-dog inspecting a very clean campsite at Jack Creek. The group was from Kansas City, MO.

I enjoyed giving out a couple of bookmarks with Hiker-dog’s “signature.” 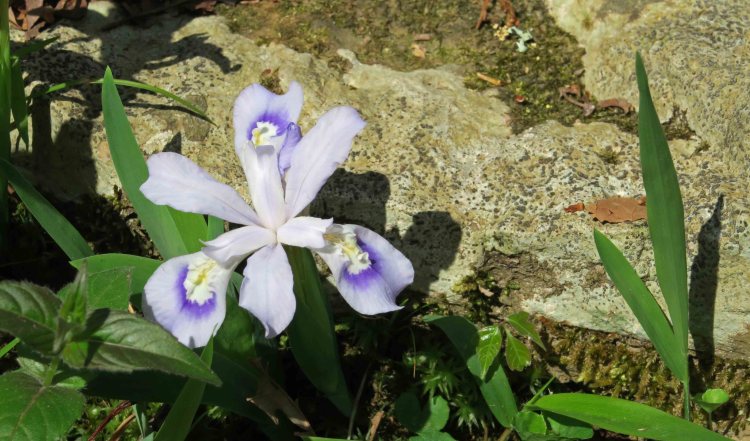 Wild iris on the trail 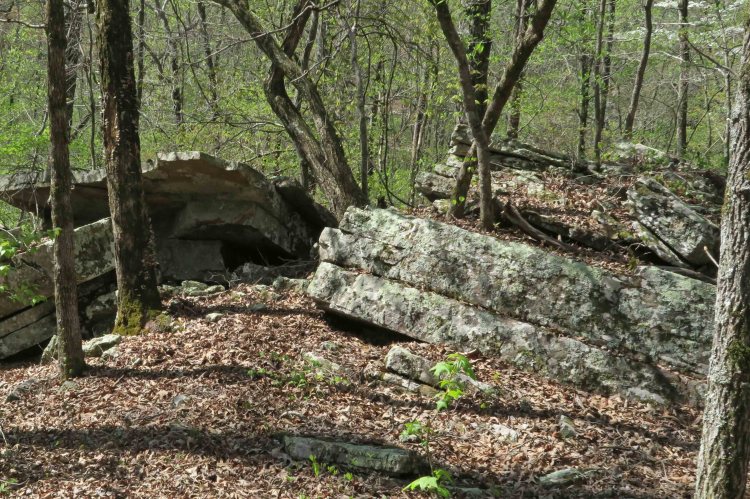 Boulders broken by time and the elements

I’ll end with a few photos of history along the trail approaching Lake Fort Smith and next to the lake.

Any ideas on the make and model?

Small cascade above a pool.

My reason for hiking down the upper section of the Jack Creek drainage on an old roadbed was to see if I could find an access point for my 4.3-mile section of the Ozark Highlands Trail. I maintain from the Dockery Gap Trailhead west to the second Jack Creek Crossing. I carried my cellphone as a camera to save weight and avoid damaging my real camera while bushwhacking.

As often happens, the Ozark National Forest rewarded me with unanticipated beauty. As the upper Jack Creek flows toward the Ozark Highlands Trail, it carves its way through a high-walled canyon. The rock walls contain several rushing cascades. Hiker-dog and I enjoyed stopping along the creek for the views and to pick off ticks. Tis the season for ticks and such. I look forward to returning to this location with my real camera in fall or winter!

Pool on Jack Creek, tan from runoff of recent thunderstorms. 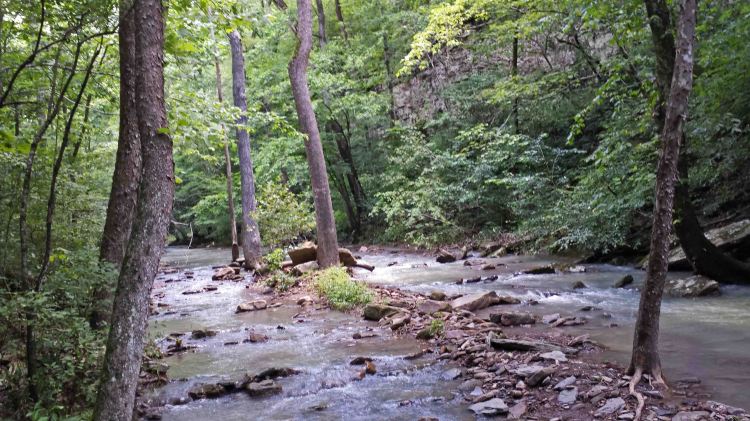 Canyon walls next to Jack Creek

Evidence of old homestead next to Jack Creek

View upstream from the top of a rushing cascade.